Jan 2020 The B. Christopher Band “Two Rivers Back” 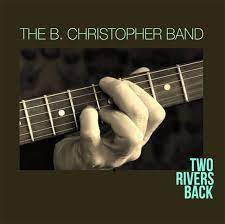 Artista / Grupo: The B Christopher Band

Posted at 00:00h in Reviews by Roser Blues

B. Christopher is a prestigious and highly demanded composer in American television. Christopher has written countless songs and melodies for TV series and shows.

Thanks to his work for TV blues sessions, B. Christopher had the bright idea to put together some excellent musicians, form a band and publish this recording, where he becomes the absolute leader not only he has chosen the musicians but also he has composed all the songs and lyrics, he is one of the four recording engineers, the album executive producer and he the band guitar player too. To do so he has counted with the impressive voices of Michael Powers, EJ ‘Moose’ Boles and Eddie Testa, keyboard player Bruce Katz, Jerry Portnoy on harmonica, Andy Snitzer on tenor sax, bass players Nathan East, Stu Hamm and Eric Collier and finally drummers Anton Fig and Shawn Pelton, all them outstanding solo musicians or belonging to prestigious bands. Thirteen magnificent songs ranging from funky blues to contemporary blues, classic blues romp, delta blues, instrumental blues, classic slow blues, hip shaking train boogie or even the classic rolling piano blues romp. This is a more than recommended recording with not a single bad note on it.

Walter Trout releases a new album after the pandemic

A new book: “Going Up the Country: Adventures in Blues Fieldwork in the 1960s” by Marina Bokelman and David Evans