Posted at 11:24h in Artículos by Alicia 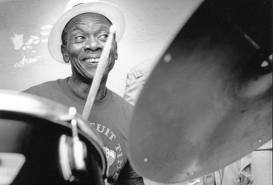 Widely acclaimed as one of the best drummers in the blues, Sam Carr was born Samuel Lee McCollum in 1926 outside of Marvell, Arkansas. His father was the influential blues guitarist and vocalist Robert Lee McCollum, who recorded under the names Robert Lee McCoy and Robert Nighthawk, but Carr didn’t meet him until he was seven years old.

About a year and half after his birth, Sam’s mother, Mary Griffin McCollum, left Sam to the care of the Carr family, who adopted him and raised him on their farm near Dundee, Mississippi. Carr’s first instruments were the harmonica and “Jew’s harp,” and around age 16 he moved to Helena, his father’s then residence, where he collected money at the door during his father’s performances at the river city’s thriving clubs. During this time Carr also worked as a chauffeur and played bass for his father, who was already an established professional musician.

Between 1937 and 1940, McCollum recorded twenty-six songs under the name “Robert Lee McCoy” for the Decca and Bluebird labels, including the song “Prowling Night Hawk,” whose popularity lended him the artist name “Robert Nighthawk.” During this period he also appeared as a sideman on many records by artists including Sonny Boy Williamson 1, Big Joe Williams, Peetie Wheatstraw, Walter Davis and Speckled Red. On all these recordings he played acoustic guitar, but by 1942, Carr recalled, Nighthawk was playing electric guitar with a slide, an approach later documented on recordings for labels including Chess. Nighthawk (1909-1967) is relatively unheralded today, but was very influential in shaping the guitar styles of artists including B.B. King and Muddy Waters.

In 1946, when Carr was 20, he married his wife Doris and took up sharecropping in Arkansas. After a heated argument with the agent for the plantation owner, the Carrs packed their belongings on a bicycle, crossed the river by ferry, and took off for Chicago by train. They soon moved to St. Louis to live with Carr’s mother, and Carr began playing bass with harmonica player Tree Top Slim. He formed his own band, Little Sam Carr and the Blue Kings, which initially featured Nighhawk’s wife Early Bea on drums before Carr decided to take on that role.

In St. Louis, Carr played mostly in “low-class clubs” in poor neighbourhoods, and in 1956 began working regularly with Frank Frost, who then played both harmonica and guitar. The pair backed Sonny Boy Williamson II for a while, and continued to perform together after they moved to Mississippi in the early ‘60s. In Helena, Arkansas they sometimes backed Williamson, Houston Stackhouse, and Robert Nighthawk.

In 1962 Clarksdale-based guitarist Big Jack Johnson joined Carr and Frost, and for several years Doris sang in front of the band. Later that year the trio made recordings under the name Frank Frost and the Night Hawks for producer Sam Phillips in Memphis, and recorded an album, Hey Boss Man, on his new Phillips International label. One of the songs they recorded for that album was “Jelly Roll King,” which inspired a name the trio later occasionally performed and recorded under, the Jelly Roll Kings.

In 1966 the group returned to the studio, this time in Nashville, where they cut several singles under Frost’s name for the Jewel label. They scored a minor hit with “My Back Scratcher,” a take off on Slim Harpo’s earlier hit “Baby, Scratch My Back.” Although it is often assumed that the Jewel recordings featured Frost on harmonica, it was actually their frequent collaborator, Arthur Lee Williams.

The Jelly Roll Kings did not enter the studio again for over a decade, and while the group continued to play together throughout the ‘60s and the ‘70s the three men often worked outside of music. Carr drove a tractor near his home in Lula, Johnson drove an oil truck, and the famously laid-back Frost did as little as possible.

In the mid-‘70s Chicago-based blues fan Michael Frank encountered the Jelly Roll Kings playing at the Black Fox Club, owned by Big Jack, and in 1978 he recorded the group. The following year released he the Jelly Roll Kings debut album Rockin’ The Juke Joint Down as the debut release on his Earwig label. That album effectively introduced the group to the blues market, but didn’t generate enough attention or demand to keep the group together regularly as a unit.
In 1978 Frost moved to Greenville, where he played with musicians including Willie Foster and T-Model Ford, and was sometimes joined by Carr, who continued to live in Lula. Back in the Clarksdale area, Carr continued to play with Johnson, often in clubs owned by Johnson.

Following Frank Frost’s death in 1999, Carr has lent his drum skills to various bands in the region, guested on albums including Buddy Guy’s award-winning Sweet Tea, and led his own group, the Delta Jukes, often with Dave Riley on guitar and vocals. The group has recorded a number of albums, including Working for the Blues (2002, Black Magic), Down in the Delta (2004, Bluesland), and Let the Good Times Roll (2007, Blue Label).

In the last decade Carr’s skills have achieved wide acclaim, with annual nominations for best drummer for Handy Awards (now Blues Music Awards) a Governor’s Award for Excellence in the Arts from the state of Mississippi in 2007, and multiple awards from Living Blues magazine.